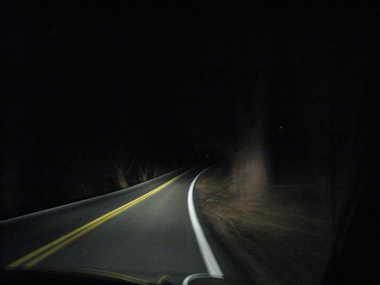 It was after midnight and I was lost. There was nothing in sight — and this was before cell phones or even pagers. I was on my way to a church youth retreat in rural Maryland with three teens. When I saw the Welcome to Pennsylvania sign I wanted to cry. Where was I and how in the world was I going to find an out-of-the-way retreat center that wasn’t even visible from the dark, country road leading to it? How did I get all the way to Pennsylvania from Virginia on my way to Maryland? And why hadn’t I packed some snacks for always-hungry teenagers?

It’s funny. I don’t even remember how I found it. I just remember my husband, Benny, pacing outdoors after 1 AM when I finally drove up. He’d been trying to find a way to call the police but the office was locked and he didn’t know how to locate the onsite tenant. The look on his face as he searched the darkness with my car headlights blinding him made me realize how frightened he had been.

Thank God for whoever invented GPS’s.

As a mother I have felt lost more times than I can count. Whether you are carrying your first child or have seven young adult children (like me) the desperation of motherhood has likely visited you on numerous occasions. Feeling lost is scary when you’re trying to find a retreat center in the dark, but not nearly as fretful as wondering if your kids are getting all they need to feel loved and well prepared to take their place in a sometimes dark world when they’re big.

I wasn’t supposed to get lost that night with three teens in my car. I should have made sure I was paying better attention as I searched for State Road whatever it was. And when the first stirrings of uncertainty bubbled into my mind I should have stopped to ask for help. Well, that is, if I could have found a gas station or a house that didn’t look haunted.

Likewise, aren’t mothers supposed to do what’s right every time? Aren’t we supposed to know what to do and when to do it? Good mothers don’t get distracted and lose their way, right? They think things through and prepare for the unexpected and don’t take wrong turns and always have a backup plan.

Typing that sounds as foolish to me as it probably does to you. When we’re sitting on the couch thinking rationally every mother knows she has and will make mistakes. Just like her mother and her mother before her. But when desperate motherhood strikes and life smacks us in the face in the form of a seriously ill or chronically moody or immoral or withdrawn child we too often rush to, “What did I miss and how did we get here?”

We do miss things. And sometimes negative patterns in our children point us to areas in which we need to change by providing more effective or focused encouragement, training, affection, discipline or instruction. I’ve had those times when God has used a child’s repeated misbehavior or failure to teach me about mothering deficiencies. But if having flawed children who make foolish, sinful or sometimes dangerous choices automatically points to mothering failures, then when a kid remains basically compliant, cooperative and respectful all the way to adulthood then do we also get to give ourselves self-congratulatory pats on the back?

Wise mothers don’t take the blame or the credit.

Yes, what we do matters. We are responsible to the God who loaned us our children to raise for His glory in desperate hope that they will take what they learned into the next generation. Our flaws — especially in the form of consistent anger, neglect or lack of biblical love — will likely leave our kids with adult issues to face in the future. Yet the One who is most responsible for and capable of making our kids who we long for them to be is the God who gave them to us in the first place.

And unlike Benny all those years ago, He’s not pacing and wondering if we’re okay. Rather, He “neither slumbers or sleeps” as He wisely, faithfully and tenderly watches and guides and protects us and our children from anything — even hard stuff — that won’t be used for good in our lives and theirs.

No mother is perfect. But because “God so loved the world that He gave His only Son” to die for us (John 3:16) we have hope that if the death of the innocent Christ was used for the greatest good ever, making a way for us to be reconciled to God, then He can be trusted to use all for good for kids who grow up with imperfect mothers.

One of the coolest and most helpful things that happened to me some years ago was admitting when I got lost as a mom. Doing so made moms around me feel safe admitting they missed a turn or two as well. And some of us soon felt understood enough to start admitting that what scared us most was not stuff with our kids but our own recurring anger and impatience. Selfishness and laziness. Putting on a good face when others were around and being the “real” us behind the closed doors of our homes. Harshness. Jealousy of other mothers. Desires to impress rather than commitment to keep it real. Feelings of failure. Exhaustion. Favoring the easy child over the challenging one.

Being lost in the hopelessness that we’re stuck in our own unhealthy patterns is the worst kind of lostness of all.

Have you felt lost as a mother? Are there times when mental hand wringing leaves you feeling desperate and inadequate? Do you sometimes look at your kids and wish there was someone who could help you figure out how to do this motherhood thing better?

I have good news.

There is Someone. He has helped me more times than I can count. And He has used every single mistake and missed turn on my part for good in my kid’s lives. He’s not a far off God but is named Emmanuel — God with us.

Being lost is scary, I know. But those times make the times when things are bright and the path seems clear really special.

More on that tomorrow.

2 thoughts on “Lost and Scared: And No GPS”

What are your thoughts? Cancel reply