I happend to catch this candid shot of JJ and Elsie in my backyard last week having a sibling “moment”….

Last week my 5-year-old granddaughter, Elsie, got mad at her brother, JJ. Really mad. No one knows why. But she was so mad she drew a picture of herself and him. Only she drew a diagonal line through him…like those signs you see that warn people not to walk in the grass or cross the street in a certain spot.

Her 7-year-old brother saw his sister’s obvious anger and aloofness, but he hadn’t seen the picture she drew. He just knew she wouldn’t play with him and was snippy when he spoke to her. This had certainly happened numerous times before so he knew what to do. JJ found his mom and told her Elsie was angry and wouldn’t play with him.

That day was like every other one for Rachel — just another sibling skirmish to referee like she had hundreds before. Perhaps the thought came: “How many times am I gonna have to do this?” But what she didn’t know is that this tiff would be different…

In recent months I’ve heard of numerous relational conflicts between people. Folks have gotten really mad at others for varying reasons, some serious and others petty.  Living in a fallen world means promises get broken, feelings get hurt and people get angry. For some reason holiday stress — coupled with the common disappointment when our Christmas season doesn’t closely resemble Hallmark cards and movies — brings relational conflicts to the surface.

As I said on Monday, the holidays can be laced (or it some cases, doused) with disappointment, and one of the big reasons is tension between people who have been or want to be close, but aren’t.

I learned something from JJ and Elsie last week. And their mom. The gospel can shine brightest when people sin.

When Rachel brought her children together to talk through their conflict, she expected things to go as usual. Elsie would complain about something her brother had done. JJ would try to explain or defend himself, and perhaps point out something Elsie did that warranted his reaction. Rachel would try to help them see the importance of getting along and ask them to play nicely. Or maybe, depending on whether or not 3-year-old Eleanor was writing on walls with markers or getting into Mommy’s makeup, Rach would take the time to lovingly remind them that Jesus can help them love each other and then pray with them for His help.

But God had other plans. 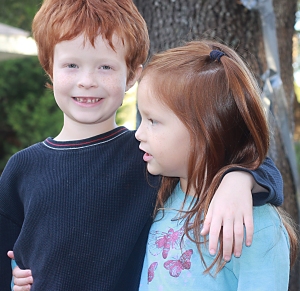 They really do love each other.

Before Rachel had time to address Elsie’s anger toward her brother she was bringing over her picture to show Mommy. She was crying, not because she was mad at JJ but because she had drawn a mean picture that demonstrated her angry attitude.  Rachel explained that she understood how easy it is to get angry at people, saying she has drawn that same picture over and over in her own heart. Then JJ cozied up to his sister and put his arm around her.

Rachel then told them that because they are sinners, Jesus provided a way for them to be forgiven. All Elsie needed to do to stop crying and feeling bad about her mean picture and angry attitude toward her brother was to ask Jesus and JJ to forgive her. Once she did that, it was all over and she didn’t have to feel badly anymore. So Elsie asked forgiveness of God and her brother, then began happily playing.

When Rachel told me the story several days later, she wasn’t boasting about what good parents she and Josh are to raise such humble kids. She was genuinely amazed at God’s work in both her children. She knew that Elsie’s sincere sorrow over drawing such a mean picture of her brother, and JJ’s eagerness to empathize with her, were first and foremost evidences of God’s grace in their lives.

And what’s thrilling is this same grace is available to you and me.

Is there someone you’re not looking forward to spending time with this Christmas, or someone you’re glad you won’t be seeing? Over the past year (or more?) have you noticed growing anger or bitterness building in your heart toward anyone? Have you drawn a mental picture of someone and then essentially crossed him or her out of your life?

Perhaps you can prayerfully consider humbling yourself and sharing your “picture” with them. God will show you what this should look like. He might lead you to take the first step of simple (but not easy!) initiative in the form of a quick email to say hello; or maybe prompt you to plunge right into deeper waters by asking forgiveness for your anger or bitterness.

The reality is they may not respond the way JJ did — and things could actually get even more muddy. But God will be watching. He knows all about the costs of bridging the gap between those in conflict. The cross demonstrates to us that if God could reconcile sinful man to His holy self, there is no relationship beyond repair.

P.S.  Repairing relationships doesn’t always mean things have to be like they once were or that wrong patterns of relating will change right away. Relationships typically take a long time to break down…and equally long to repair. Healthy interactions don’t mean you have to have Christmas dinner together. More on that tomorrow.

We're Benny and Sheree. You can find out more about us by clicking the "about" link above.

A calendar of posts

Musings on the Faithfulness of God

A Rich Harvest of Ideas to Help Your Marriage Grow

Morning by Morning
The Inspire Tribe

The latest news on WordPress.com and the WordPress community.